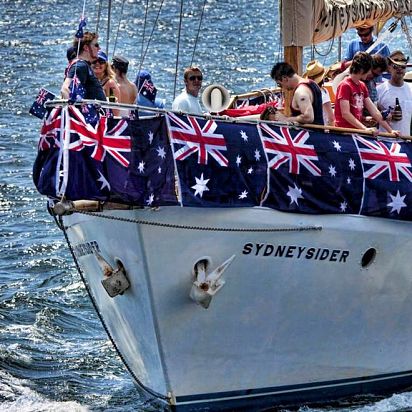 There’s nothing quite like Australia Day on Sydney Harbour, the crowning jewel of our national celebrations. Big, bright and exciting, this year’s program brought to you by P&O Cruises will see the harbour transformed into a floating festival of new events, with some old favourites mixed in.

This year Australia Day celebrations run over a long weekend from 25-27 January, 2014. It's a day of fun for all, with the highlight for families being the Summer Playground in Hyde Park.

Much of the action takes place on and around Sydney Harbour. WugulOra marks the start of Australia Day celebrations with the raising of the Aboriginal and Australian flags on the Sydney Harbour Bridge from 7:30am. Pack a picnic and your sunscreen and head to a spot by the harbour to enjoy all the action. In the evening, Darling Harbour becomes the site of more Australia Day activities.

The Harbour Concert kicks off from 6pm with a line-up of great performers followed by the Darling Harbour Australia Day Spectacular with lights, more music and fabulous fireworks.

7.30am WugulOra – Indigenous Ceremony
A fire will be lit at the Sydney Opera House and carried aboard the Tribal Warrior. Bark canoes travelling from the four compass points will meet the Tribal Warrior under the Harbour Bridge. Fire from each of the tribes will be used to smoke the bridge as the Australian and Aboriginal flags are raised, commemorating our past and celebrating our future.

Farm Cove will be closed to all vessels during the swim and will re-open at 10.30am.

11.00am Ferrython
Sydney’s beloved old gals will once again line up for one of Australia’s most iconic free events. Cheer on your favourite ferry as they power down the harbour and back to the finish line under the Sydney Harbour Bridge at 11.45am.
Please note: There is a 50 metre exclusion zone around each competing ferry.
Best vantage points: Between the Sydney Harbour Bridge and Shark Island, Milsons Point off Jeffrey St Wharf (best location) Lavender Bay.

12.15pm & 1.30pm Tug and Yacht Ballet - NEW
A new addition to the Australia Day program, the Tug and Yacht Ballet will be a dazzling, choreographed display, using the central and eastern harbour as the stage. Two agile and powerful tug boats will dance with a flotilla of yachts, courtesy of EastSail, giving harbour spectators a precision sailing display, manoeuvring in unison in an amazing show of colour and movement. Visit eastsail.com.au to be part of this event.

Vessels of all shapes and sizes are welcome to join the flotilla and everyone is encouraged to join in the spirit of the day by dressing their vessels with colour and flags. Be as creative as you like!
Vessels participating in the Parade will go into the running to win a share of $2000 cash prizes for the Best Dressed Vessels.

The Parade will marshal south of Kurraba Point at 12.00pm (using VHF 15 as the marshalling channel) and depart at 12.30pm. It will do a loop of the harbour, finishing at Athol Bay at 2.00pm, where prizes will be awarded for the Best Dressed Vessels.
Stay and join in the fun at the Tinnie Muster.

Visit australiaday.com.au for the route and further information. 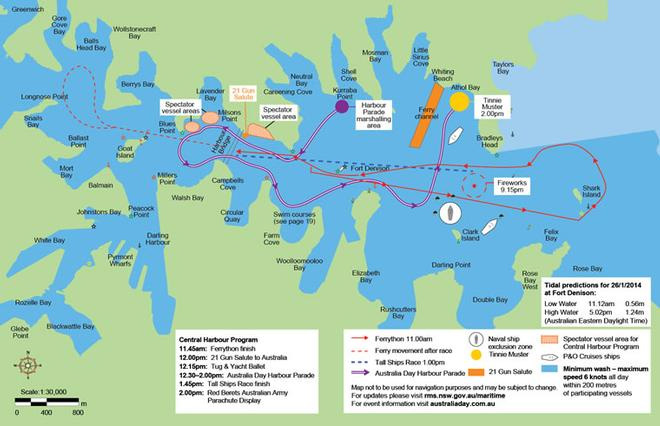 1.00pm Tall Ships Race
Starting at Bradley’s Head, Sydney’s tall ships will lead an impressive fleet of historic and charter vessels as they make their way up the harbour and finish under the Sydney Harbour Bridge. This year the Southern Swan, Soren Larsen, Bark Endeavour, James Craig and Windward Bound are expected to do battle.
All public and private vessels are invited to join in – just mind the 50 metre exclusion zone around each tall ship.
Best vantage point: Bradley’s Head to the Bridge on the northern side of the harbour.

1.00pm Harbour Concert
A highlight of the Australia Day program, the Harbour Concert will feature a tribute to Australian music from some of our hottest chart topping artists on board an impressive, floating stage at Blues Point.

1.15pm 178th Australia Day Regatta
The 178th Australia Day Regatta, the world’s oldest continuously conducted annual sailing regatta, will take place throughout the afternoon.
Traditional and classic yachts from around the nation, some up to a century old, are being invited by the Royal Sydney Yacht Squadron, on behalf of the Australia Day Regatta Inc., to take part in this historic event.
In addition to the main harbour regatta, a large fleet of ocean racing yachts will race to Botany Bay and return for the Cruising Yacht Club of Australia’s City of Sydney Sesquicentenary Trophy.
Central Harbour Program

Spectator vessel areas off Milsons Point and Lavender Bay will provide the best vantage points for the spectacular program of events taking place in the middle of the harbour between 11.45am and 2.00pm.

From 2.00pm Tinnie Muster – NEW
All boaties are invited to come join the party to celebrate our national day in Athol Bay from 2.00pm. Bring the family down for an afternoon of music, games and on water activities. Chill out to some tunes from the floating stage and grab a snag from the BBQ barge.
All boat sizes are welcome, with vessels under 8 metres accommodated in an exclusion area in front of the stage.
The Australia Day Harbour Parade will conclude in Athol Bay at 2.00pm and the prizes for Best Dressed Vessels will be awarded.